A Court of Thorns and Roses book review – The book is characterized by its rich world-building, complex characters and intense romantic plot. The story centers around Feyre, who is forced to live with a faerie named Tamlin, who is under a curse. As Feyre and Tamlin spend more time together, they fall in love and Feyre works to break the curse.

Along the way, Feyre discovers that the faerie world is not as idyllic as she once thought, and that there are darker forces at work.

The book has been well received by readers and critics alike. Many have praised Maas’ writing style, the well-developed world, and the dynamic and relatable characters.

The romance between Feyre and Tamlin has been particularly well-received, with many praising the chemistry and the slow burn of their relationship.

Sarah J. Maas is a New York Times bestselling author of fantasy novels for young adults. She is best known for her “Throne of Glass” series.

A Court of Thorns and Roses summary 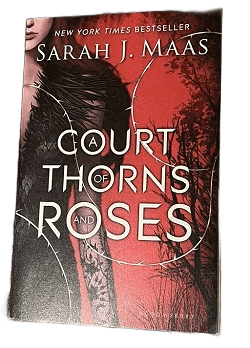 “A Court of Thorns and Roses” is a fantasy novel that tells the story of Feyre, a young woman living in poverty with her family in the mortal world. One day, while hunting in the woods, Feyre kills a wolf and soon afterwards is confronted by a faerie named Tamlin.

Feyre learns that the wolf was actually a faerie and that by killing it, she has violated the treaty between the mortal and faerie worlds. As punishment, Tamlin takes Feyre to live with him in the faerie world as his captive.

As Feyre spends more time in the faerie world, she discovers that it is not as idyllic as she once thought. She learns that Tamlin is under a curse and that the curse can only be broken by a mortal woman who loves him truly.

Feyre and Tamlin begin to develop feelings for each other and Feyre works to break the curse.

Feyre also discovers that there are darker forces at work in the faerie world, including a powerful queen who wants to destroy Tamlin and his court. As Feyre becomes more entrenched in the faerie world, she must choose between returning to her mundane life or staying and fighting for the faeries and the man she loves.

The book is the first in a series and the sequels continue to follow Feyre’s journey as she becomes more involved in the faerie world politics and faces new challenges, both personal and collective.

“A Court of Thorns and Roses” by Sarah J. Maas features a wide range of characters, both mortal and faerie. Here are some of the main characters in the book:

“A Court of Thorns and Roses” by Sarah J. Maas features several plot twists throughout the story. Here are some of the main ones:

The ending of “A Court of Thorns and Roses” by Sarah J. Maas is a culmination of the events that take place throughout the book. The story concludes with Feyre, Tamlin, and their allies defeating Amarantha and breaking the curse on Tamlin’s court.

Feyre, who has discovered that she is a High Fae with the ability to control the elements, plays a crucial role in the final battle against Amarantha. With the help of her friends, she is able to defeat the queen and free Tamlin’s court from her curse.

The story also concludes with Feyre and Tamlin’s relationship reaching a new level. They confess their love for each other and Tamlin accepts Feyre for who she is, including her mortal background.

In the end, Feyre must return to the mortal world to give birth to their child, but they make a plan to meet each other again. She also finds out that her sisters and family are also High Fae, and they decide to come back to the faerie world. The story concludes on a hopeful note, with Feyre and Tamlin united and their future together looking bright.

The ending also sets the stage for the following books in the series, where the characters will continue to face new challenges and adventures in the faerie world.

Listen A Court of Thorns and Roses audiobook