If you’re an Apple fan, then comparing the Kindle Fire HDX versus Google Nexus 7 is not going to awake any interest in you. The best choice that you have to make when choosing your next tablet is whether to go for an iPad Air or an iPad Mini retina.

If you’re not a fan of all things Apple, if you’re on a tighter budget, or if you just want a 7″ tablet, then your choices are a little more diverse.

However, whilst there are plenty of 7″ tablets to choose from, the two most likely contenders would seem to be the Kindle Fire tablet, specifically the HDX, and the new Google Nexus 7″. In terms of value for money, power and functionality, both of these devices seem to be pretty much in the sweet spot just at the moment.

Like Apple, both Amazon and Google have their fans and detractors – but if you haven’t reached a decision on either tablet, which one should you choose?

The Nexus is a little taller than the HDX, but the HDX is wider.

As far as depth goes, they’re both about the same.

The Nexus 7 is a little bit lighter, but not much – nothing significant.

There’s not really a great deal to choose between the two devices as far as weights and dimensions go. 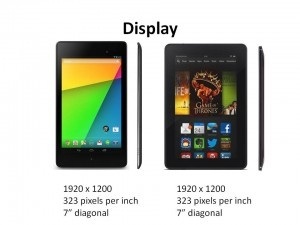 Going by the numbers, there’s nothing to choose between the two displays.

In use, the Nexus display seems to be a little brighter, but the Fire’s color reproduction seems to be slightly better.

Once again, there’s not much in it and you would probably declare this aspect of the contest a draw.

According to claimed battery life, the Kindle will outlast the Nexus by a couple of hours – with Amazon claiming 11 hours (mixed use) against 9 hours for the Nexus.

Of course, it does depend very much on what you’re doing on your tablet – and most manufacturers do tend to, if not exactly exaggerate, put their best foot forward.

A number of independent tests have found that the HDX and the Nexus, when used in the same manner, both tend to last for a little over eight hours between battery charges.

Once again, no clear winner. 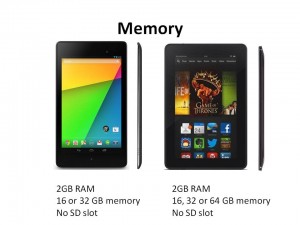 Both devices have 2GB of RAM, which should be plenty for most users.

Neither tablet has a slot for an SD card.

Whether that’s a big deal for you or not will depend on how you intend to use your tablet. Many people won’t find this to be a big drawback, but nevertheless, the Kindle has a slight edge due to the fact that it offers a little more choice

You may also like: Google WiFi vs Nest WiFi

Both devices come with Wi-Fi connectivity as the base option.

Both offer 4g LTE as an additional extra. However, whereas the 4G is an option for all memory sizes in the HDX range, if you want 4G for your Nexus you will, for the moment at least, need to choose the more expensive 32GB option; it’s not an option for the 16GB entry-level model.

Of course, if you don’t want 4G, then that won’t bother you one bit. Nevertheless, it’s another small advantage in favor of the Fire HDX.

Both devices use Android, but the Kindle uses a heavily modified version (which has now been given the name “Mojito”). The Kindle carousel type display isn’t to everyone’s taste – but it is pretty user-friendly and ideal for new tablet users.

Nexus owners will, of course, always get the latest version of Android and could, quite reasonably, expect to get any updates first.

Nexus owners will also have access to Google play – which will not be available to Kindle Fire tablet owners. Amazon has its own Android app store, which has most of the popular apps available. There’s also a free app of the day every day.

Both Android tablets have powerful processors, but the Kindle’s higher clock speed gives it a significant advantage, especially for processor hungry tasks. Whether or not most users will notice the difference will depend on how the tablet is used – but you can’t really have too much processing power can you?

Over the piece, the Kindle’s higher clock speed is probably just enough to give it the edge in this category.

The Nexus has a clear advantage when it comes to cameras. It has a 5MP rear camera and a 1.2MP front-facing camera.

The Kindle’s 720P forward-facing camera should be fine for Skype and similar social applications, and many people won’t miss a rear-facing camera on a tablet – but it’s a definite win for the Nexus as far as cameras go.

Amazon has introduced a 24 hour, 365 days live help facility for both of its new HDX tablets called “Mayday”. It will be a big help to new tablet users and might come in handy for more experienced techies from time to time.

As far as content goes, Amazon’s massive eco-system of videos, TV shows, books, and magazines make the Kindle route very tempting for those who want to keep up to speed with their favorite TV shows, watch a few movies, play some games and send the odd e-mail.

Of course, for every person who is salivating at getting easy access to all that lovely Amazon content, there’s another who doesn’t want to be “tied in” to Amazon. Of course, you’re not tied into Amazon – they just make it so easy to access Amazon content with one screen touch – but some prospective buyers will prefer a more “independent” experience.

Those who don’t want to be too reliant on the Amazon content system might well consider the Nexus to be a good choice. It lets you access the Google content system, Google Play, which has plenty of books, apps, movies, etc. to choose from. Nexus owners will always get Android apps and updates first – and if you’re already using Gmail, Google Calendar, Google Maps, or any of the other numerous Google products on a regular basis, then the Nexus might appeal.

Pricing is pretty much the same for each tablet. Both the Kindle and the Nexus cost around 100-150$ and increase to around 150-200$ for 32GB. The only obvious difference, as mentioned earlier, is the fact that the Kindle also has a 64GB option.

If you want to add 4G LTE connectivity to your Kindle, you can choose from AT&T or Verizon. It’ll cost you about $100 for 12 months’ connectivity, which isn’t a bad deal. Pricing for $G on the nexus 32GB will vary from carrier to carrier.

Fire Tablet vs Nexus 7: Which One is Best?

Be in no doubt, these are two superb tablets. Both are recently updated and feature-packed. Either one would serve you very well indeed.

Both tablets are very fast, but the Fire HDX has the edge thanks to its 2.2GHz clock speed. Choose it if you are a speed freak or if you will be using your tablet for lots of processor-hungry tasks.

The Fire HDX is also a good choice if you’re looking for a user-friendly entertainment hub. Whilst the carousel may not be everyone’s cup of tea, it’s certainly easy to use and will let you access Amazon’s content at the press of a button. You won’t be tied to Amazon content – it’s just that Amazon, unsurprisingly perhaps, makes it super easy to access their own content.

So, if you’re looking for a blistering fast tablet with access to lots of content, and at a fraction of the price of an iPad, pick either one of these two.