Gone Girl book review – “Gone Girl” by Gillian Flynn is a psychological thriller that has received widespread critical acclaim for its gripping plot, complex characters, and expertly crafted narrative. The story follows the events that occur when Amy Dunne, a successful New York writer, goes missing on the day of her fifth anniversary, and her husband Nick becomes the prime suspect in her disappearance.

One of the key strengths of the book is its exploration of the unreliable narrators, which creates an intense sense of uncertainty and tension throughout the story. The reader is constantly trying to piece together the truth of what happened to Amy, and the characters’ perspectives and motivations are not entirely clear.

The book also delves into the dark side of human nature, exploring themes of marriage, trust, and betrayal in a way that is both disturbing and thought-provoking.

Flynn’s writing is sharp and witty, with a clever mix of humor and suspense that keeps the reader engaged from beginning to end. The pacing is also expertly done, with a slow build-up of tension leading to a dramatic and satisfying conclusion.

The book also has been adapted into a movie directed by David Fincher and written by Gillian Flynn. The movie is well received by the audiences and critics.

Overall, “Gone Girl” is a must-read for fans of psychological thrillers, and it is a well-crafted, suspenseful and intriguing novel that will keep you guessing until the very end. 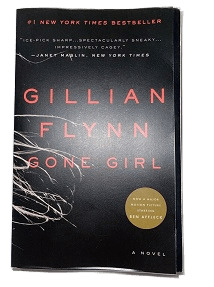 “Gone Girl” is a novel by Gillian Flynn that tells the story of Amy Dunne, a successful New York writer, who goes missing on the day of her fifth anniversary. Her husband, Nick Dunne, becomes the prime suspect in her disappearance, and as the investigation progresses, it becomes clear that their marriage was far from perfect.

The story is told from alternating perspectives, with Nick’s present-day narrative interspersed with diary entries from Amy’s past. It is revealed that Amy has disappeared on purpose, as she planned the whole thing to frame Nick as a murderer, as a way to take revenge from him for his infidelity.

As the police investigation continues, Nick becomes increasingly desperate to clear his name, and Amy’s diary reveals that their marriage was fraught with lies, manipulation and deceit. The investigation takes a dramatic turn when a body is found, but it is not Amy’s.

The story reaches a thrilling climax as Nick and Amy’s pasts collide in a shocking and unexpected way. The novel ends ambiguously, leaving the reader to ponder about the true nature of their relationship and the consequences of their actions.

Nick Dunne: The husband of Amy Dunne, Nick is the narrator for much of the book. He is a struggling writer and a college dropout who is struggling to find his place in the world. He’s seen as a charming, yet unreliable narrator, and the reader is never quite sure whether to trust him or not.

Amy Dunne: Nick’s wife, Amy is a successful writer and the other narrator of the story. She’s an intelligent, beautiful, and highly manipulative woman who has planned her own disappearance to frame Nick as a murderer.

Boney: A detective in charge of investigating Amy’s disappearance, Boney is a tough, no-nonsense woman who is determined to get to the bottom of the case.

Go: Nick’s twin sister, Go is fiercely loyal to her brother and becomes his rock during the investigation.

Andie: Nick’s mistress, Andie is a young woman who works at the bar Nick frequents.

Tanner Bolt: Nick’s defense attorney, Tanner is a flamboyant and charismatic lawyer who is determined to help Nick clear his name.

Desi Collings: Amy’s ex-boyfriend, Desi is a wealthy, entitled man who becomes a key suspect in the investigation.

he main plot twist in “Gone Girl” by Gillian Flynn occurs when it is revealed that Amy Dunne, who was believed to be a missing person, has actually orchestrated her own disappearance to frame her husband Nick Dunne as a murderer. Throughout the book, Nick is portrayed as a prime suspect in her disappearance, as the evidence seems to pile up against him. However, as the investigation continues, it becomes clear that Amy has been manipulating events from the beginning, with the ultimate goal of framing Nick for her murder.

The twist is revealed when Amy is found alive, and it turns out she has been hiding in a cabin that belongs to her ex-boyfriend Desi Collings, whom she had convinced to help her with her plan. It is revealed that Amy had been unhappy in her marriage, and had become increasingly resentful and vengeful towards Nick, whom she had grown to hate. She staged her own disappearance and made it look like Nick had killed her in a fit of rage.

The ending of “Gone Girl” by Gillian Flynn is complex and open-ended, leaving the reader to ponder the consequences of the characters’ actions.

After Amy is found alive, Nick is cleared of all suspicion and the truth about Amy’s disappearance is revealed. Amy and Nick reconcile, but their relationship is deeply damaged and they both have a hard time trusting each other again.

Nick and Amy then move to the Ozarks, where Nick’s twin sister Go lives, and they start a new life together. However, Nick is now working at a bar, and Amy is pregnant with a child that may or may not be Nick’s. They both have changed, Amy is now a woman who has lost her confidence, and Nick, who was once a charming man, is now bitter and resentful.

The ending leaves the reader with a sense of unease, as it is unclear whether Nick and Amy’s relationship can survive the trauma of Amy’s deception, and whether they will be able to move on from their past. The book also leaves an open question about the possibility of Nick being the father of the child, which adds another layer of uncertainty to the story.

The ending is not a traditional happy one, but it is a realistic one, that reflects the complexity of human relationships and how actions can have consequences that last a lifetime.

Why is Gone Girl by Gillian Flynn a good read ?

Gone Girl by Gillian Flynn is a good read because it is a suspenseful and gripping story that keeps the reader guessing until the end. The characters are well-developed and complex, making them relatable and easy to connect with. Flynn’s writing is sharp and witty, and she masterfully builds tension throughout the book. Additionally, the story raises thought-provoking questions about marriage, trust, and the nature of truth.