The book received widespread critical acclaim for its beautiful and evocative writing, as well as its fresh perspective on a classic story. Miller’s prose is poetic and lyrical, and she does an excellent job of bringing the characters and their world to life. The novel is also praised for its portrayal of the relationship between Achilles and Patroclus, which is both tender and tragic. 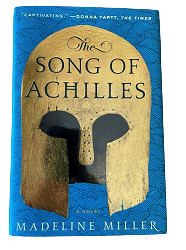 “The Song of Achilles” by Madeline Miller is a novel that tells the story of the Trojan War from the perspective of Patroclus, a close companion and lover of the legendary Greek hero Achilles. The novel begins with Patroclus, a prince exiled from his homeland, being taken in by Achilles’ family as a companion to Achilles, who is also an outcast. As they grow up together, Patroclus and Achilles form a deep bond and fall in love.

As they grow older, Achilles’ fate as the greatest warrior in Greece becomes more apparent, the gods and goddesses take notice, and Achilles is called to fight in the Trojan War. Patroclus, who has always been in Achilles’ shadow, begs to be allowed to fight alongside him, and Achilles reluctantly agrees.

During the war, Patroclus proves himself to be a brave warrior but also suffers from the loss of his friends and Achilles. Achilles’ mother, the goddess Thetis, makes a new set of armor for him, but Patroclus is killed while wearing it, mistaking for Achilles by Hector. The death of Patroclus sends Achilles into a rage and leads him to seek revenge for Patroclus’ death, ultimately leading to the fall of Troy.

The novel explores the themes of love, destiny, and the cost of war. It provides an intimate look at the characters of Achilles and Patroclus, and their complex and tragic relationship. The novel also offers a fresh perspective on the story of the Trojan War, highlighting the humanity of the characters and the emotional toll of war.

“The Song of Achilles” by Madeline Miller features several characters from Greek mythology, including the following main characters:

Achilles: The legendary Greek hero of the Trojan War, known for his incredible strength and skill in battle. He is Patroclus’ closest companion and lover.

Patroclus: A prince exiled from his homeland, who is taken in by Achilles’ family as a companion to Achilles. He becomes Achilles’ closest companion and lover.

Odysseus: A clever and cunning Greek warrior, who is a close friend of Patroclus and Achilles.

Briseis: A Trojan princess who is captured by Achilles and becomes his concubine

Peleus: Achilles’ father, a mortal king and the main mentor of Achilles

Thetis: Achilles’ mother, a sea-nymph and goddess who is determined to make her son a god.

Agamemnon: The leader of the Greek army during the Trojan War, who is often at odds with Achilles.

Hector: The Trojan prince and the leader of the Trojan army, who kills Patroclus in battle, believing him to be Achilles.

Throughout the novel, the author also includes references to other characters from Greek mythology such as Zeus, Apollo, and Aphrodite, which all play a role in the story and the characters’ fate.
Read also:

“The Institute” by Stephen King

“The Song of Achilles” by Madeline Miller does not have a traditional plot twist in the sense of an unexpected revelation or turn of events. However, the novel does have a number of dramatic and emotional events that shape the story and the characters.

One of the most significant plot points in the novel is the revelation of the true nature of Patroclus and Achilles’ relationship. Their bond is portrayed as a deep and tender friendship at the beginning of the novel, but as the story progresses, it becomes clear that their relationship is romantic and intimate in nature. This revelation is significant because it challenges traditional notions of Achilles as a heroic figure and adds depth and complexity to his character.

Another significant plot point is the death of Patroclus in battle. This event is particularly tragic because Patroclus is killed by Hector, who mistakes him for Achilles, and because Patroclus’ death drives Achilles to seek revenge, ultimately leading to the fall of Troy. This event also highlights the cost of war and the emotional toll it takes on the characters.

Lastly, the revelation of Achilles’ divine parentage. He is the son of a mortal king and a sea-nymph goddess, and she wants to make him a god. This revelation also plays a role in the fate of Achilles and Patroclus and the tragic outcome of their story.

“The Song of Achilles” by Madeline Miller has a tragic ending, as it reflects the fate of the characters in the Greek mythology. The novel concludes with the fall of Troy, where Achilles has his revenge for Patroclus’ death by killing Hector and leading the Greeks to victory. However, in the process, Achilles himself is killed by Paris, the prince of Troy, who shoots him with an arrow guided by Apollo to his only vulnerable spot, the heel.

In the end, Patroclus and Achilles’ love story and the tragic fate of both characters, reflect the consequences of the Trojan War. The novel also highlights the cost of war and the emotional toll it takes on the characters. The novel’s ending also reflects the theme of destiny and the idea that the gods and goddesses have a plan for everyone, which ultimately decides the fate of the characters.

The novel’s final chapter reflects on the end of the war and the fate of the characters, particularly Patroclus and Achilles. It also reflects on the idea that their love story would be told and retold for centuries and how it would be remembered. The ending is also reflective of the idea that the Trojan War was not only a war between nations, but also a war between gods, and how the human characters were caught in the middle of it.

Why is The Song of Achilles by Madeline Miller worth to read?

Exploration of themes of love and destiny: The novel explores the themes of love and destiny, and how they shape the characters and their fate. The relationship between Patroclus and Achilles is central to the story, and the novel does an excellent job of depicting the tenderness and tragedy of their love. The novel also explores the idea that the gods and goddesses have a plan for everyone, which ultimately decides the fate of the characters.

Listen The Song of Achilles by Madeline Miller audiobook